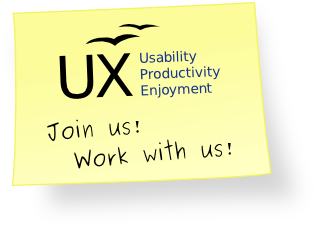 Note: Italic text is some kind of German translation, since the LinuxTag will take place in Germany.

An informal meeting to share thoughts, experiences and other information covering the topics Usability and User Experience in the Free Software world. The meeting is organized by Björn from OpenUsability.org and Christoph from the OpenOffice.org User Experience Team.

You should participate if you are interested in: integrating User Centered Development into the development of your FOSS project, wanting to add your UX expertise to a FOSS project, wondering how to take benefits out of community work with real users, some usability tips for your FLOSS project, ...

Please note that the given information is preliminary. According to the organizers, the schedule might still change.

The Meetup in Retrospect

The nine participants that came to the meetup at the Linux Tag in Berlin on Friday June 11 introduced themselves and then said why they are interested in this meeting. The lively, informative and enlightening discussion that ensued lasted for more than three hours, and even for some throughout the rest of the day. The discussion took place in English, but also sometimes in German. A summary of the discussion points is further below.

Many thanks to everyone who participated!

We touched on various topics. This is a brief summary of many of them.

Amarok: Paticipants exchanged experiences with the player in its various stages.
Terminology: Just the word "usability" turns off some listeners because they have a bad view of it.

OS Development: In open source development there is often nothing between development and the users. There needs to be an instance (a proxy) to interpret; a combination of people and tools. OpenOffice.org does have this instance in the UX community. They have a mainly non-developer community and the UX team works as interpreter between users and developers.

Poor Communication: It became clear when exchanging our experiences that poor communication and differing priorities are often at the heart of the difficulties. Points made: 1) a good product needs a good process, 2) there needs to be a balance between  documenting and doing-----key phrases are "agile development", "documenting the essentials", "keeping records of rationale"

Java: The usability of Java code was mentioned as being created very usable from the start: object= noun, function= verb. Usability can be applied to all areas.

Market Research: You'll never get good usability by doing market research because people don't know what they want or could have. Apple was mentioned as not doing user research. Apple is lead by one visionary and are the opposite of free software: they do not release early or often; they expect the user to fit the product, not the other way around. What can we learn from Apple's approach? It is impossible to fill in every niche in the market with one product, so OS gives you the opportunity to customize a base product to fit each niche: "mass customization". This is where usability work is key to find out what subset of available functionality is needed and what needs to be added.

Short comings of free software: OS projects still fight each other. They all have operating costs and administrative overhead so that takes up resources (time and people) and reduces productivity. OPSI cofunding scheme example was cited (http://www.opsi.org/). One participant requested an API to enable export of data from proprietary software that lawyers use to OOo. He want to pay for this API and suggested a cofunding scheme.

Motivation for working in an OS Community: reputation, recognition, references for C.V. (when seeking employment). Each person has a personal reason. It is important to keep that inner motivation (sometimes money, fun, bonding). Many people say they want to help or give something back but they often get whilte noise because the projects do not cultivate and guide.

Problem of Money: If some people get paid to develop a product, others say why should I develop it for free? So they don't volunteer. You can save or ruing a project with money. The dilemna is where to spend money. Money is not allowed to become the primary motivator. OS doesn't help feed your family.

You need all the different roles: Developers, UX, Users, Documentation and not one person trying to do it all.

How to get developers to give priority to usability? Show them that their functionality/code is valuable but not getting used because the users can't find it, etc.

Buy-in: In OS projects you can't tell people what to do. You have to get buy-in, explain and be an example for others to follow.

Universities: The computer science courses at Univ. do not put enough emphasis on UX. The developers should have all seen a usability lab in action to be convinced.

Respecifying: It is sometimes easier to respecify a product if it has extremely poor usability. Fixes will never get to the root of the problem. "If you are sitting on a dead horse, get off." (quote from Steffen)