Arrays may be helpful in reducing the number of cells you use, but they can be a little complex to understand. In some ways, they extend what a spreadsheet can do beyond what spreadsheets were intended for. Almost all tasks are possible without them.

An array is simply a rectangular block of information that Calc can manipulate in a formula - that is, it is information organised in rows and columns. An array may be cells on a spreadsheet, or may be held internally by Calc.

There are 2 ways to specify an array in a formula: 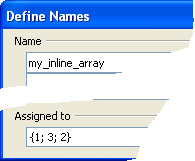 You can give a name to a range of cells: select the range and choose Insert - Names - Define.

You can give a name to an inline array: choose Insert - Names - Define; type the array (eg {1; 3; 2} including the curly braces) in the Assigned to box.

Some functions, such as SUM(), AVERAGE(), MATCH(), LOOKUP(), accept one or more of their parameters as arrays.

However, you may still use an array where a single value is expected - for example SQRT( {9; 4} ). If you enter the formula ‘normally’ by pressing Enter, Calc will then evaluate the formula using a single value from the array as follows:

If it is an inline array:

Calc will use the first value (the ‘top left’).

If it is a range:

1. Calc will return an error unless the array is a single row or a single column.

2. For a single row or a single column range, Calc will use the value where the formula cell’s column/row intersects with the array (or return an error if there is no intersection).

The real power of arrays comes when you enter a formula in a special way, as an ‘array formula’. You do this by pressing Cntrl-Shift-Enter instead of the Enter button (or by ticking the Array checkbox if you are using the Formula Wizard).

If in cell B2 you type ={3; 4} but press Cntrl-Shift-Enter instead of Enter, the cell becomes an 'array formula'. The formula now returns the entire array {3; 4}. Cell B2 displays 3 and cell C2 displays 4.

Note that if you entered the formula using the Enter key, simply selecting the cell and pressing Cntrl-Shift-Enter will not convert the cell to an array expression - you must make an actual edit (such as adding then deleting a character), or click the Function Wizard and tick the Array checkbox.

If you now try to edit cell B2, you are told that "you cannot change only part of an array". To edit an array you must select the entire array, either with the mouse or by typing Cntrl-/ (hold the Cntrl key and press the slash key ‘/’).

The formula bar indicates that this is an array formula by enclosing it in curly braces {}. You do not need to type these - they will disappear while you edit the formula, and Calc will show them again when you have finished editing.

When Calc evaluates an array formula, it treats ‘unexpected arrays’ as a series of values (rather than using a single value), calculating a result for each of the array elements, and returning an array of results.

The process in effect works thus:

The result of an array expression is an array, which can be used within the formula.

Some functions calculate their result as an array. If they are to return that array, they must be entered as an array formula, by pressing Cntrl-Shift-Enter (or by ticking the Array checkbox if you are using the Formula Wizard). If, instead, they are entered 'normally' with the Enter button, just the (single) top left element of the calculated array will be returned. These funtions are listed in the Array function category, and are:

Some functions (including some listed above) take parameters that are forced to evaluate as an array formula, even when the formula is entered 'normally':

For example: MODE(ABS(A1:A3)) (in normal mode) forces ABS(A1:A3) to be evaluated as an array formula, returning an array of the absolute values of A1:A3 from which MODE selects the most common value to be returned.

For example: PROB(A1:A5; B1:B5/100; 3) (in normal mode) forces B1:B5/100 to be evaluated as an array formula, returning an array where each value is one hundredth of its value in B1:B5 (perhaps because the probabilities were expressed in percent).

Maximum in a particular month

Average of entries meeting a condition

AVERAGE(IF(A1:A9="red"; B1:B9; "")) returns the average of entries in B1:B9 whose A column entries are “red”. The AVERAGE function ignores any blank entries.

The MEDIAN function can be used similarly.

Dynamic sorting of a column

Test a cell for one of a set of values

Sum of the smallest 4 numbers

Last used cell in a column