You can enter formulas in two ways, either directly into the cell itself, or at the input line. Either way, you need to start a formula with one of the following symbols: =, + or -. Starting with anything else causes the formula to be treated as if it were text.

Each cell on the worksheet can be used as a data holder or a place for data calculations. Entering data is accomplished simply by typing in the cell and moving to the next cell or pressing Enter. With formulas, the equals sign indicates that the cell will be used for a calculation. A mathematical calculation like 15 + 46 can be accomplished as shown below.

Above: A simple calculation.

While the calculation on the left was accomplished in only one cell, the real power is shown on the right where the data is placed in cells and the calculation is performed using references back to the cells. In this case, cells B3 and B4 were the data holders with B5 the cell where the calculation was performed. Note that the formula was shown as =B3 + B4. The plus sign indicates that the contents of cells B3 and B4 are to be added together and then have the result in the cell holding the formula. All formulas build upon this concept. Other ways of entering formulas are shown in Table 1.

These cell references allow formulas to use data from anywhere in the worksheet being worked on or from any other worksheet in the workbook that is opened. If the data needed was on different worksheets they would be referenced by referring to the worksheet, for example =SUM(Sheet2.B12+Sheet3.A11).

A value of 3 in cell A2 would return the result Positive, -9 the result Negative.

You can use the following operators in OpenOffice.org Calc: arithmetic, comparative, text, and reference.

In this example, specific pieces of the text were found in three different cells. To join these segments together, the formula also adds required spaces and punctuation housed within quotation marks resulting in a formula of =B6 & " " & C6 & ", " D6. The result is the concatenation into a date formatted in a particular sequence.

Taking this example further, the result cell is defined as a name, then text concatenation is performed using this defined name. Calc has a CONCATENATE function which performs the same operation. 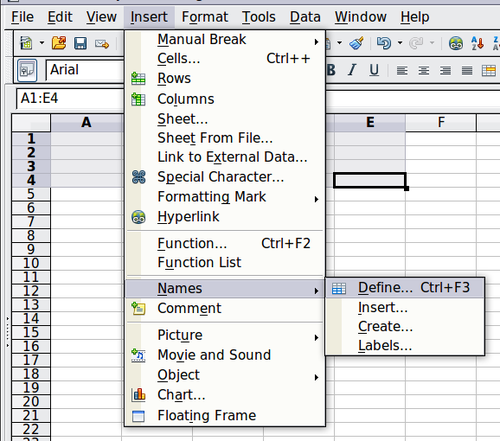 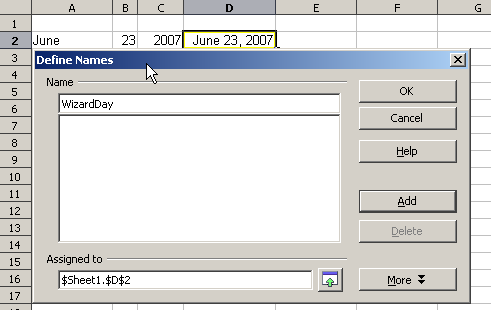 In its simplest form a reference refers to a single cell, but references can also refer to a rectangle or cuboid range or a reference in a list of references. To build such references you need reference operators. 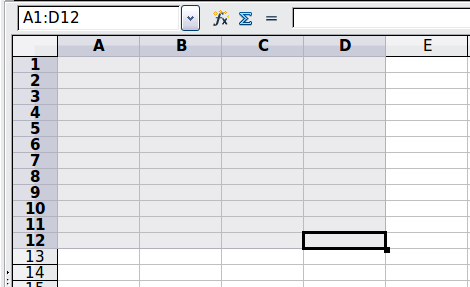 Reference to a rectangle range.

In the upper left corner of the figure above, the reference A1:D12 is shown, corresponding to the cells included in the drag operation with the mouse to highlight the range.

When you enter B4:A2 or A4:B2 directly, then Calc will turn it to A2:B4. So the left top cell of the range is left of the colon and the bottom right cell is right of the colon. But if you name the cell B4 for example with '_start' and A2 with '_end', you can use _start:_end without any error.

Calc can not reference a whole column of unspecified length via A:A or a whole row via 1:1 yet as you might know from other spreadsheet programs, see Issue 20495 .

The reference concatenation is sometimes called 'union'. But it is not the union of two sets, 'reference left' and 'reference right' as normally understood in set theory. COUNT(A1:C3~B2:D2) returns 12 (=9+3), but it has only 10 cells when considered as the union of the two sets of cells.

If the references refer to single ranges, the result is a reference to a single range, containing all cells, which are both in the left reference and in the right reference.

You can use the intersection operator to refer a cell in a cross tabulation in an understandable way. If you have columns labeled 'Temperature' and 'Precipitation' and the rows labeled 'January', 'February', 'March',… then the expression

will reference to the cell containing the temperature in February.

References are the way that we refer to the location of a particular cell in Calc and can be either relative (to the current cell) or absolute (a fixed amount).

In cell B5 the references to cells B3 and B4 are relative references. This means that Calc interprets the formula in B5 and applies it to the cells in the B column and puts the result in the in the cell holding the formula. When you copied the formula to another cell, the same procedure was used to calculate the value to put in that cell. This time the formula in cell C5 referred to cells C3 and C4.

You can think of a relative address as a pair of offsets to the current cell. Cell B1 is 1 column to the left of Cell C5 and 4 rows above. The address could be written as R[-1]C[-4]. In fact earlier spreadsheets allowed this notation method to be used in formulas.

Whenever you copy this formula from cell B5 to another cell the result will always be the sum of the two numbers taken from the two cells one and two rows above the cell containing the formula.

Relative addressing is the default method of referring to addresses in Calc.

You may want to multiply a column of numbers by a fixed amount. A column of figures might show amounts in US Dollars. To convert these amounts to Euros it is necessary to multiply each dollar amount by the exchange rate. $US10.00 would be multiplied by 0.75 to convert to Euros, in this case Eur7.50. The following example shows how to input an exchange rate and use that rate to convert amounts in a column form USD to Euros.

Copying formula from E2 to E3 and changing the formula to read absolute reference.

Applying the correct formula from E2 to E3.

The $ signs before the D and the 1 convert the reference to cell D1 from relative to absolute or fixed. If the formula is copied to another cell the second part will always show $D$1. The interpretation of this formula is “take the value in the cell one column to the left in the same row and multiply it by the value in cell D1”.

Cell references can be shown in four ways:

Knowledge of the use of relative and absolute references is essential if you want to copy and paste formulas and to link spreadsheets.

Order of calculation refers to the sequence that numerical operations are performed. Division and multiplication are performed before addition or subtraction. There is a common tendency to expect calculations to be made from left to right as the equation would be read in English. Calc evaluates the entire formula, then based upon programming precedence breaks the formula down executing multiplication and division operations before other operations. Therefore, when creating formulas you should test your formula to make sure that the correct result is being obtained. Following is an example of order of calculation in operation.

Another powerful feature of Calc is the ability to link data through several worksheets. The naming of worksheets can be helpful to identify where specific data may be found. A name such a Payroll or Boise Sales is much more meaningful than Sheet1. The function named SHEET() returns the sheet number in the collection of spreadsheets. There are several worksheets in each book and they are numbered from the left: Sheet1, Sheet2, and so forth. If you drag the worksheets around to different locations among the tabs, the function returns the number referring to the current position of this worksheet.

The spreadsheets have been set up with identical structures. The easiest way to do this is to set up the first Branch spreadsheet, input data, format cells, and prepare the formulas for the various sums of rows and columns. 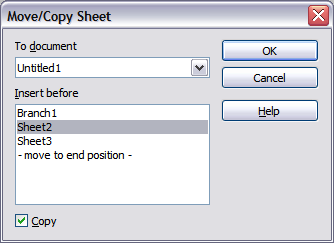 "Pasting a formula to a cell range"

The Function Wizard can also be used to accomplish the linking. Use of this Wizard is described in detail in the section on Functions.