Up to now, macros can be embedded into sub documents of a database document, that is, into forms and reports (which technically are Text documents).

As a consequence, in any place where you can currently access macros in forms, you won't be able to do so anymore. Instead, you can access the database document's macros.

Changes with Macros in Database Documents

In general, the change described herein for the first time allows to, from within a document, execute macros which are not located in this very document, but in another one. Specifically, from within a form or report (which technically, and probably perceived by many users, are separate documents, though semantically only "sub components" of the database document), you can execute macros located in the database document.

We will do this separation by introducing another global variable, called ThisDatabaseDocument. This variable will be available in Basic macros which are embedded into a database document, and always refer to this very document.

ThisComponent, in turn, will always be the component which was active when the macro was invoked. This holds no matter whether the macro is located in the database document's or in the application's Basic library. Also, it holds no matter whether the active component is a database document or any of its sub components. In particular, the various designers are also available as ThisComponent.

Script Contexts in other Script Languages

In other script languages, there is no strict equivalent of Basic's ThisComponent. Instead, scripts in other languages get an instance of XScriptContext passed, which has an method getDocument, to "obtain the document reference on which the script can operate".

Such scripts also need to distinguish between the component for which they were invoked, and the document in which they're actually embedded (if any).

This is done by introducing a member XScriptContext::getInvocationContext. It will refer to the component from which the script was invoked, being either a document (i.e. supporting XModel) or a controller (i.e. supported XController).

Database documents created with version prior to OpenOffice.org 3.0 might contain forms or reports with embedded macros or scripts. Since this constellation is prohibited as soon as macros in database documents are implemented, a migration path is necessary.

The goal is to transform documents so that all the macros and scripts are in the database document, not in its sub documents anymore. Unfortunately, this cannot be done automatically.

For once, it is difficult to (in a generic way) merge all macros from embedded documents into the database document. For instance, if two forms both contain a Basic library named "Standard", with a module named "Module1", with a function named "Foo", then moving both libraries/modules into the database document's Basic libraries will lead to name clashes. Solving those in an automated way is possible, but references to those macros will almost certainly be broken then.

Second, a complete automatic migration requires a syntactical analysis of the macro/script code. For instance, imagine a Basic macro which does a LoadLibrary call with the name of a Basic library in the form document. If this library has been moved to the database document, and perhaps been renamed in this course, the LoadLibrary call would need to be adjusted to refer to the new name. This is effectively impossible without analyzing the Basic code, effectively compiling it. Similar arguments hold for other script types.

As a consequence, we won't migrate macros and scripts in sub documents automatically.

Instead, we will show the following message box when the user opens a database document which contains a form or report with embedded scripts or macros:

So, when the user simply opens an "old" document containing macros and/or scripts in the sub documents, nothing except the above warning will happen in the first instance. Until the user migrated the macros, the database document, and all sub documents, will behave as if the feature which this spec is about were never implemented. In particular, the user is free to create additional or modify existing macros in her forms and reports, to customize macros from sub documents into her toolbar/menu, to bind those macros to events in the sub documents, and so on.

We will introduce a new menu item, called "Migrate Macros ...", located in the top-level menu "Tools", immediately below the existing "SQL ..." item.

The menu item is available only if any of the database document's sub documents contains scripts or macros, and if the document is not opened read-only.

When the user selects this menu item, a wizard will guide her through the migration, which effectively consists of the following steps:

The first step of the wizard looks as follows: 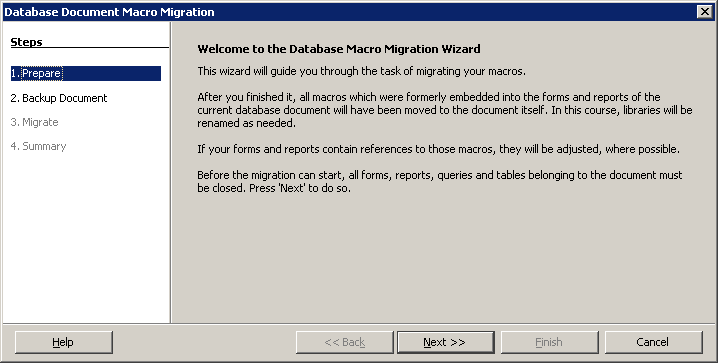 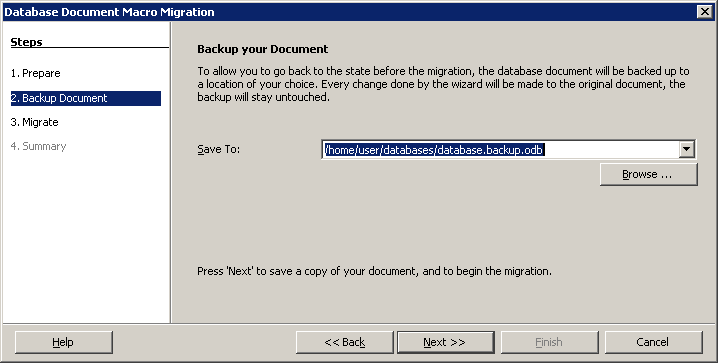 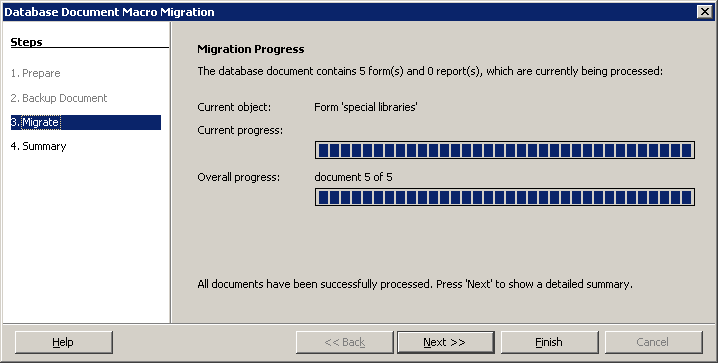 The following error conditions are recognized and distinguished by the migration process: 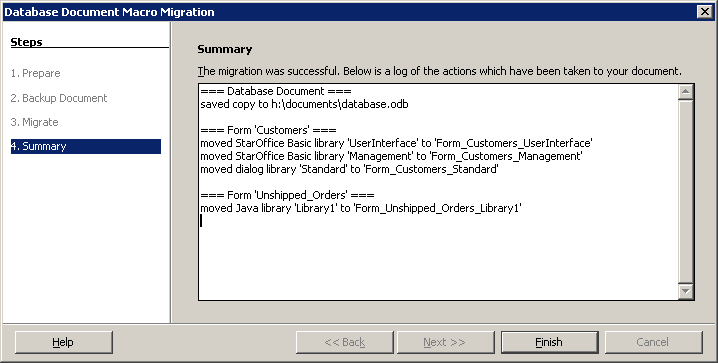 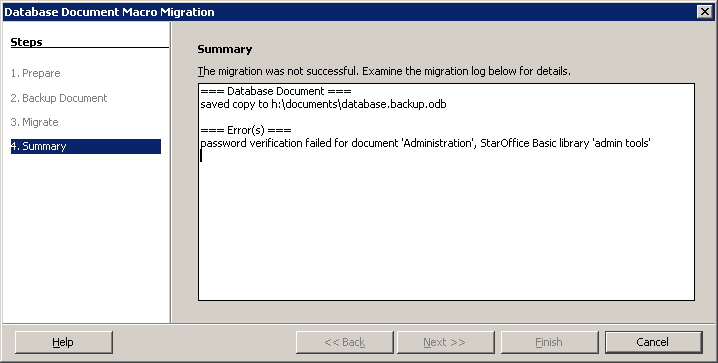 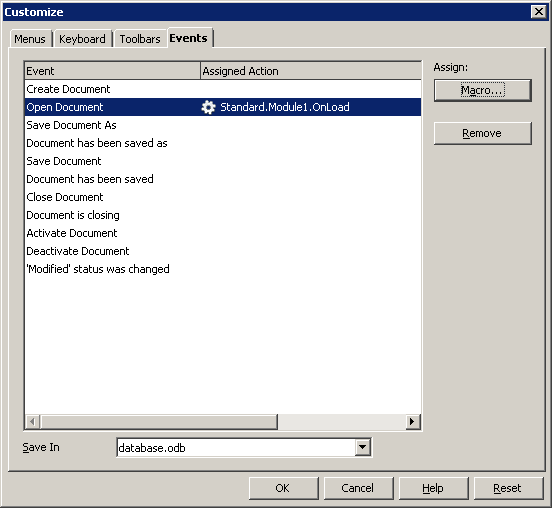 The development of this feature will produce the following milestones:

Milestone M1 and M2 are considered essential before the feature can be released. Milestone M3 is strongly desired. Milestone M4 is desired to be reached before a release, but not required.