Chapter 17: Getting Started with Macros

Imagine repeatedly entering simple information. Although you can store the information in the clipboard, if you use the clipboard for something else, the contents are changed. Storing the contents as a macro is a simple solution. (In some simple cases, including the example used here, a better solution is to use AutoText.)

Use Tools > Macros > Record Macro to start recording a macro. A small window is displayed so you know that OpenOffice.org is recording.

Type the desired information or perform an appropriate series of operations. In this case, I typed my name, Andrew Pitonyak.

Click the Stop Recording button to stop recording, save the macro, and display the OpenOffice.org Basic Macros dialog. 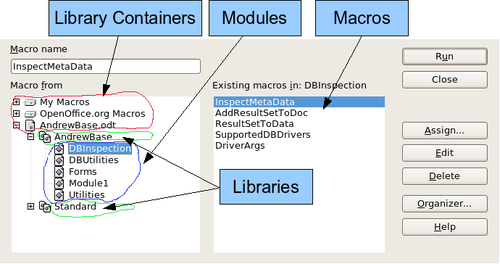 The default module name is Module1; choose a better name. Although it is still not descriptive, I used Recorded. Type a descriptive name and click OK to create the module. The OpenOffice.org Basic Macros dialog is displayed again, showing the new module.

Highlight the newly created module. In the upper left corner, type the macro name to use, such as “EnterMyname", and then click Save to save the macro.

If you followed all of the steps, the Standard library now contains a module named Recorded, which contains the EnterMyName macro3. When OOo creates a new module, it automatically adds the macro named Main.

There are other methods to run a macro. For example, use Tools > Macros > Organize Macros > OpenOffice.org Basic to open the macro organizer, which contains a Run button as well. The author, an avid macro writer, prefers the macro organizer because the dialog usually opens faster, but the selection process may be slightly slower.

Viewing and editing the macro

The macro in Listing 1 is not as complicated as it first appears. Learning a few things helps significantly in understanding the generated macros. The discussion starts with features near the top of the macro listing and describes them. If you like to avoid details, then simply change the text “Andrew Pitonyak" to what you want to insert at the current cursor position.

The keyword REM, short for remark, starts a macro comment. All text after REM (on the same line) is ignored. As a short cut, the single quote character can also be used to start a comment.

Individual macros are stored in subroutines defined with the keyword SUB. A subroutine ends using the words END SUB. The macro starts by defining the subroutine named Main, which is empty and does nothing. The next subroutine, EnterMyName, is the subroutine of interest, and it contains the newly generated code.

There are advanced topics that are beyond the scope of this document, but knowing about them might be of interest:

A very simple macro can use hard coded values for everything. Unfortunately, even simple macros that interact with OpenOffice.org must store intermediate values. Storing an intermediate value is similar to writing information on a piece of paper so that you can look at it later. The DIM statement is similar to setting aside a piece of paper to be used to store a message or note.

The EnterMyName macro defines the variables document and dispatcher as type object. Other common variable types include string, integer, and date. A third variable named args1 is defined. Args1 is a very complicated type; it is an array of property values. A variable of type array allows a single variable to contain multiple values, similar to storing multiple pages in a single book. Values in an array are usually numbered starting from zero. The number in the parentheses indicates the highest usable number to access a storage location. In this example, there is only one value, and it is numbered zero. This sounds confusing, but for now, ignore the problem and more examples will clarify the concept.

Pulling the macro together

The following details are very complete; it is not important to understand all of the details. The first line defines the start of the macro.

ThisComponent refers to the current document.

The Frame property of a controller returns a main frame for a document. Therefore, the variable named document refers to a document's frame, which receives dispatched commands.

Most tasks in OpenOffice.org are accomplished by dispatching a command. Starting with OOo version 2.0, a dispatch helper object is available, which greatly facilitates executing dispatches from a macro. The method CreateUnoService accepts the name of a service and it tries to create an instance of that service. On completion, the dispatcher variable contains a reference to a DispatchHelper.

Declare an array of properties. Each property has a name and a value. In other words, it is a name/value pair. The created array has one property at index zero.

Give the property the name "Text" and the value "Andrew Pitonyak", which is the text that is inserted when the macro is run.

This is where the magic happens. The dispatch helper sends a dispatch to the document's frame (stored in the variable named document) with the command “.uno:InsertText". The next two arguments, frame name and search flags, are beyond the scope of this document. The last argument is the array of property values to be used while executing the command InsertText.

Finally, the end of the subroutine.