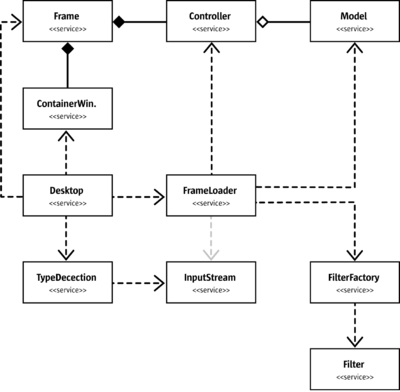 The interface com.sun.star.frame.XComponentLoader has one method:

In the following sections the arguments of this call are explained. For a more detailed description of what happens when this call is executed, see the chapter about the filtering process. It explains how the various parameters in the MediaDescriptor allow to detect the type of the file to load, the best filter to load it and the document type that will receive the data. If these parameters were known already and a document should be loaded without becoming attached to a frame, a simple way to load a document exists that bypasses the detection step and the frame creation:

A call to loadComponentFromURL() receives a sequence of com.sun.star.beans.PropertyValue structs as a parameter, which implements the com.sun.star.document.MediaDescriptor service, consisting of property definitions. In general it describes a resource and how it shall be handled in the particular context where the MediaDescriptor is used. In the context of loading a file it describes the "from where" and the "how". In the content of storing a document using the interface com.sun.star.frame.XStorable it describes the "where to" and the "how". The table below shows the properties defined in the media descriptor.

Some properties are used for loading and saving while others apply to one or the other. If a media descriptor is used, only a few of the members are specified. The others assume default values. Strings default to empty strings in general and interface references default to empty references. For all other properties, the default values are specified in the description column of the table.

Some properties are tagged deprecated. There are old implementations that still use these properties. They are supported, but their use is discouraged. Use the new property that can be found in the description column of the deprecated property.

To develop a UNO component that uses the media descriptor, note that all the properties are under control of the framework API. Never create your own property names for the media descriptor, or name clashes may be induced if the framework in a later version defines a property that uses the same name. Instead, use the ComponentData property to transport document specific information. ComponentData is specified to be an any, therefore it can be a sequence of property values by itself. If you do use it. make an appropriate specification available to users of your component.

The media descriptor used for loading and storing components is passed as an in/out parameter to some methods of objects that participate in the loading or storing process, e.g. the com.sun.star.document.TypeDetection service or a com.sun.star.document.ExtendedTypeDetection service, but also to the filter objcects involved. This enable these objects to add more information to the MediaDescriptor. As an example, if the MediaDescriptor at the beginning just contains a URL. If an object uses this URL to open a stream, it should add this stream to the MediaDescriptor (Stream, InputStream or OutputStream). This prevents that other objects have to create the stream a second time (unfortunate if a remote file is loaded) and it must be reused by later users of the MediaDescriptor.

So if a method gets a MediaDescriptor parameter for loading content it is supposed to do the following:

If it gets a MediaDescriptor parameter for storing content the workflow is:

Methods that get the MediaDescriptor as in-parameter only of course can't modify it.

Such empty documents also can created without a frame:

The URL and media descriptor loadComponentFromURL() have two additional arguments, the target frame name and search flags. The method loadComponentFromURL() looks for a frame in the frame hierarchy and loads the component into the frame it finds. It uses the same algorithm as findFrame() at the com.sun.star.frame.XFrame interface, described in section Frame Hierarchies.

Returns the frame itself. The same as with an empty target frame name. This means to search for a frame you already have, but it is legal.

Returns the top frame of the called frame .,The first frame where isTop() returns true when traveling up the hierarchy. If the starting frame does not have a parent frame, the call is treated as a search for "_self". This behavior is compatible to the frame targeting in a web browser.

Returns the next frame above in the frame hierarchy. If the starting frame does not have a parent frame, the call is treated as a search for "_self". This behavior is compatible to the frame targeting in a web browser.

Creates a new top-level frame as a child frame of the desktop. If the called frame is not part of the desktop hierarchy, this call fails. Using the "_blank" target loads open documents again that result in a read-only document, depending on the UCB content provider for the component. If loading is done as a result of a user action, this becomes confusing to the users, therefore the "_default" target is recommended in calls from a user interface, instead of "_blank". Refer to the next section for a discussion about the _default target.

Similar to "_blank", but the implementation defines further behavior that has to be documented by the implementer. The com.sun.star.frame.XComponentLoader implemented at the desktop object shows the following default behavior.

First, it checks if the component to load is already loaded in another top-level frame. If this is the case, the frame is activated and brought to the foreground. When the OpenNewView property is set to true in the media descriptor, the loader creates a second controller to show another view for the loaded document. For components supporting this, a second window is opened as if the user clicked Window - New Window. The other components are loaded one more time, as if the "_blank" target had been used. Currently, almost all office components implementing com.sun.star.frame.XModel have multiple controllers, except for HTML and writer documents in the online view. The database and bibliography components have no model, therefore they cannot open a second view at all and OpenNewView leads to an exception with them.

Next, the loader checks if the active frame contains an unmodified, empty document of the same document type as the component that is being loaded. If so, the component is loaded into that frame, replacing the empty document, otherwise a new top-level frame is created similar to a call with "_blank".

Names starting with an underscore must not be used as real names for a frame.

If the given frame name is an arbitrary string, the loader searches for this frame in the frame hierarchy. The search is done in the following order: self, children, siblings, parent, create if not found. Each of these search steps can be skipped by deleting it from the com.sun.star.frame.FrameSearchFlag bit vector:

A typical case for a named frame is a situation where a frame is needed to be reused for subsequent loading of components, for example, a frame attached to a preview window or a docked frame, such as the frame in OpenOffice.org that opens the address book when the F4 key is pressed.

The frame names "_self", "_top" and "_parent" define a frame target relative to a starting frame. They can only be used if the component loader interface finds the frame and the setComponent() can be used with the frame. The desktop frame is the root, therefore it does not have a top and parent frame. The component loader of the desktop cannot use these names, because the desktop refuses to have a component set into it. However, if a frame implemented com.sun.star.frame.XComponentLoader, these names could be used.

The reserved frame names are also used as a targeting mechanism in the dispatch framework with regard to as far as the relative frame names being resolved. For additional information, see chapter Using the Dispatch Framework.

The example below creates a frame, and uses the target frame and search flag parameters of loadComponentFromURL() to load a document into it.

The loadComponentFromURL() call returns a reference to a com.sun.star.lang.XComponent interface. The object belonging to this interface depends on the loaded component. If it is a component that only provides a component window, but not a controller, the returned component is this window. If it is an office component that provides a controller, the returned component is the controller or its model, if these is one. All Writer, Calc, Draw, Impress or Math documents in Apache OpenOffice support a model, therefore the loadComponentFromURL() call returns it. The database and bibliography components however, return a controller, because they do not have a model.