This section describes the UNO Reflection API. This API includes services and interfaces that can be used to get information about interfaces and objects at runtime.

The interface XIdlClass is one of the central interfaces of the Reflection API. It provides information about types, especially about class or interface, and struct types. Besides general information, for example, to check type identity through the method equals() or to determine a type or class name by means of the method getName(), it is possible to ask for the fields or members, and methods supported by an interface type (method getFields() returning a sequence of XIdlField interfaces and method getMethods() returning a sequence of XIdlMethod interfaces).

The interface XIdlField is deprecated and should not be used. Instead the interface com.sun.star.reflection.XIdlField2 is available by querying it from an XIdlField interface returned by an XIdlClass method.

The interface XIdlField or XIdlField2 represents a struct member of a struct or get or set accessor methods of an interface type. It provides information about the field (methods getType() and getAccessMode()) and reads and - if allowed by the access mode - modifies its value for a given instance of the corresponding type (methods get() and set()).

The interface XIdlMethod represents a method of an interface type. It provides information about the method (methods getReturnType(), getParameterTypes(), getParameterInfos(), getExceptionTypes() and getMode()) and invokes the method for a given instance of the corresponding type (method invoke()).

The com.sun.star.beans.XIntrospectionAccess interface provides a list of all properties (method getProperties()) and methods (method getMethods()) supported by the object. The introspection maps methods matching the pattern

to a property Foo of type FooType.

com.sun.star.beans.XIntrospectionAccess also supports a categorization of properties and methods. For instance, it is possible to exclude "dangerous" methods, such as the reference counting methods acquire() and release() from the set of methods returned by getMethods(). When the Introspection service is used to bind a new scripting language, it is useful to block the access to functionality that could crash the entire Apache OpenOffice application when used in an incorrect manner.

The XInvocation interface invokes methods and access properties directly by passing their names and additional parameters to the corresponding methods (method invoke(), getValue() and setValue()). It is also possible to ask if a method or property exists with the methods hasMethod() and hasProperty().

When invoking a method with invoke(), the parameters are passed as a sequence of any values. The Invocation service automatically converts these arguments, if possible to the appropriate target types using the com.sun.star.script.Converter service that is further described below. The Introspection functionality is suitable for binding scripting languages to UNO that are not or only weakly typed.

The XInvocation2 interface extends the Invocation functionality by methods to ask for further information about the properties and methods of the object represented by the Invocation instance. It is possible to ask for the names of all the properties and methods (method getMemberNames()) and detailed information about them represented by the com.sun.star.script.InvocationInfo struct type (methods getInfo() and getInfoForName()).

By means of the InvocationAdapterFactory functionality it is only necessary to map the scripting language specific native invocation interface, for example, realized by an OLE IDispatch interface, to the UNO XInvocation interface. Then, any combination of interfaces needed to represent the services supported by a UNO object are provided as an adapter using the createAdapter() method.

Another important use of the invocation adapter is to create listener interfaces that are passed to the corresponding add...Listener() method of an UNO interface and maps to the methods of an interface to XInvocation. In this case, usually the createAdapter() method is used.

The TypeDescription services and interfaces are listed here for completeness. Ordinarily this functionality would not be used when binding a scripting language to UNO, because the high-level services Invocation, Introspection and Reflection provide all the functionality required. If the binding is implemented in C++, the type type and the corresponding C API are used directly.

The following illustration provides an overview of how the described services and interfaces work together. Each arrow expresses a "uses" relationship. The interfaces listed for a service are not necessarily supported by the service directly, but contain interfaces that are strongly related to the services. 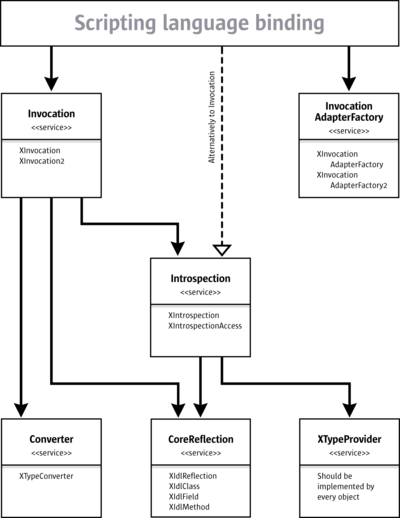