The drawing framework is a framework used by Impress and Draw for the coordinated activation and deactivation of resources like views, panes, and tool bars.

The primary goal in designing the drawing framework was to turn Impress and Draw into modular applications that can easily be extended by additional features. This should be possible dynamically through extensions, not only statically at compile time. The drawing framework is accessible to extensions that are deployed via the extension manager (menu entry Tools->ExtensionManager...). This allows an extension to provide for instance a new view and to control when to show this view and in which pane to display it. This can be done in any programming language for which there is UNO API support. The [Presenter Screen|Presenter Screen extension] is one example for this.

The design of the drawing framework addresses the following goals:

The drawing framework is implemented on top of and abstracts from existing framework functionality provides mostly by the SFX2 and Framework projects.

With the experience from the implementation of the Presenter Screen extension the first incarnation of the drawing framework (that is described by older versions of this page, see history for this or older versions) has been cleaned up and simplified into its current form.

The drawing framework is used by Impress and Draw for managing views, panes, and one or two toolbars.

The following sections describe the inner structure of the drawing framework in more detail. It starts with the set of supported resources, the ResourceIds that identify resources, and configurations that describe the set of active or requested resources. Last comes a description of the update process that involves the actual activation and deactivation of resources.

The drawing framework has been desinged for four types of resources:

While the first three need little explanation (the little explanation is done in the API documentation) the concept of command groups is not used (yet) anywhere else. A command group is a collection of commands realized by a module that implements at least the com::sun::star::frame::XDispatch interface and implements one or more commands (that to some are known as slots).

A resource is identified by a non-empty set of URLs that describe the actual resource and its dependency on other resources. One URL is called the resource URL and defines the type of the resource. A possibly empty set of anchor URLs specifies a set of resources to which the one in question is anchored. Panes for example act as containers for views and thus are their anchors: the resource URL of the left slide sorter in the left pane is . Its anchor is the left pane with the URL being .

Here, the first part after private:resource/ specifies the type of resource:

The final part of the URL defines the actual resource.

Each resource is identified by an object that implements the com::sun::star::drawing::framework::ResourceId service with its com::sun::star::drawing::framework::XResourceId interface. The XResourceId interface gives access to a set of URLs which specify the resource. There is one URL returned by the getResourceURL() function that defines the type of the resource. A possibly empty set of URLs returned by getAnchorURLs() specifies the anchor resource.

Panes are the typical anchor resources. They do not have an anchor, therefore getAnchorURLs() returns an empty list for them. An example for an anchor that is not a pane is the view tab bar. It is linked to the center pane. It is the anchor for its tabs that each represent one view that may by displayed in the center pane. The resource ids of the two left most tabs are for example

The ResourceId service provides four functions for creating ResourceId objects. These are createEmpty() and create() for creating an empty resource id and one that has no anchor. The createWithAnchor() variant creates a resource whose anchor is given as ResourceId object. When the later is empty then the resulting resource could have been created with create(). Finally createWithAnchorURL takes two URLs, one for the actual resource and one for its anchor. These four variants cover the most common usages but it may be extended in the future (note drawing framework API is not yet marked as published and may be modified.)

A list of known resources can be found here.

A configuration describes a set of resources. There are two important configurations, which ideally are identical:

Usually the two configurations differ only temporarily after a new request for the activation or deactivation of a resource has been made but not yet been processed. Eventually the current configuration is updated to reflect the requested configuration. There may, however, be circumstances, that do not allow a resource to be activated or (less likely) to be deactivated. One reason for this is that some resources are created asynchronously and become available only after a little time.

It is possible obtain a copy of the requested configuration and restore it later. This allows to undo temporary changes. For example, the in-place slide show uses this feature to temporarily hide the side panes and to restore them when the show ends.

The drawing framework consists of controllers, factories, and application logic modules. These are located on three layers. The assignment to the different layers depends on the knowledge about different aspects of the resource management:

Resource Layer
The resource factories in the resource layer know how to activate or deactivate resources. The XResourceControllers are called by the XConfigurationController to update the the current configuration so that it looks like the requested configuration. 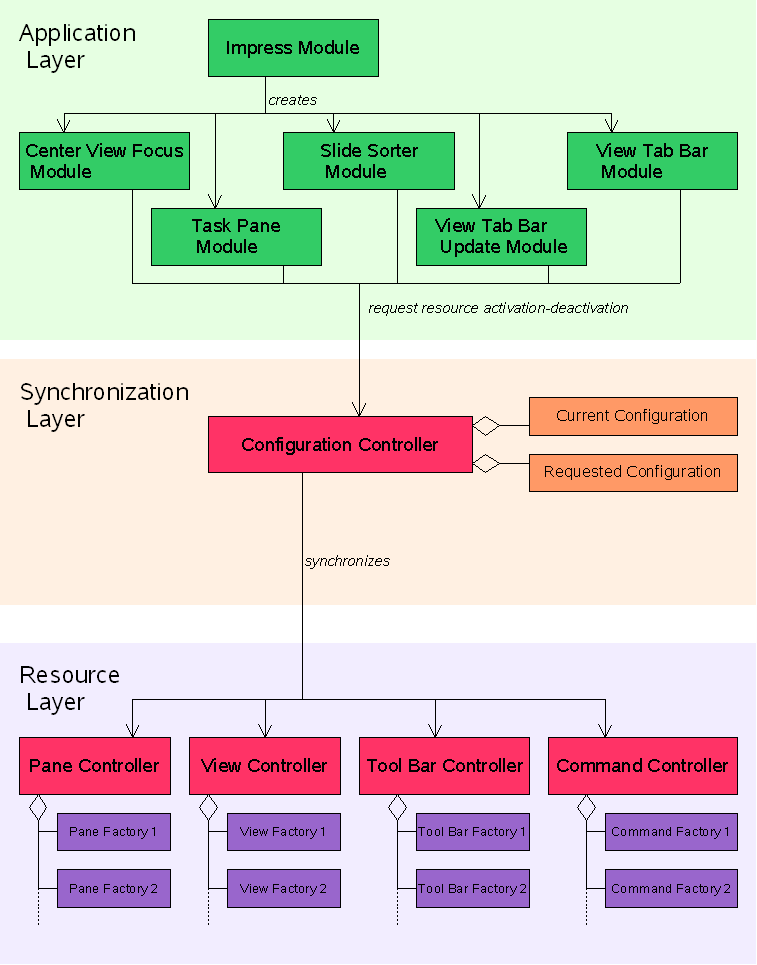 Resource factories can implement a cache to store deactivated resources. Some resources like the slide sorter bar are activated and deactivated frequently. Caching it may speed this up.

The drawing framework negotiates between modules implementing application logic that want to show or hide a resource on one side and the resource factories on the other side. The negotiation process is iterative: the activation request of a resource made by one application logic module may cause the activation request of another resource made by a second module. For example, when the user switches the view in the center pane to the outline view, then the task pane is deactivated.

The negation process is split into two phases, one for collecting a list of all the necessary changes and the second for updating the GUI to reflect these changes.

It is the task of the configuration controller to order the activations and deactivations according to dependencies between affected resources and to optimize the update phase with respect to time and visual artifacts/flickering.

The drawing framework is designed to be extensible with regard to the set of known resources and to the application logic.

For a new resource you have to provide a factory and register it at the configuration manager. An example could be a new view or a new tool bar.

For a new piece of application logic add a listener to the configuration controller and react to activations or deactivations of relevant resources.

The examples in the following sections show how to use the drawing framework to request and access resources and how to react to changes of the current configuration. Note that the code is C++ like pseudo code that can not be compiled as is.

One example for that is a request for the activation of the slide sorter bar:

The following subsections provide a short introduction of the UNO API of the drawing framework. For details please refer to the API documentation (not yet available.)

Once you have obtained access to the XConfigurationController, making requests to activate or deactivate resources is simple. The following code requests the activation of the slide sorter bar:

If you compare this to the code bove that uses the FrameworkHelper to accomplish the same thing then you see, that the FrameworkHelper only hides the connection from the ViewShellBase to the XConfigurationController. The rest of the call is basically the same.

However, the drawing framework does not provide too many automatisms on this layer (that is the task of the modules in the application layer) so the pane in which to show the slide sorter has to be requested as well.

The two requests should be executed together. An intermediate update of the current configuration is not necessary and would lead to an annoying display of an empty window before the slide sorter bar is properly shown. The probability that this happens is low but not zero. Therefore it is good practice to lock the XConfigurationController while the two requests are made. This prevents unwanted updates. You can call the lock() and unlock() methods directly but it is safer to use the ConfigurationController::Lock inner class to do that. Adding this and bringing the two requests into the logical order you get

If you want to access an active resource directly then you have to ask the XConfigurationController for it. Suppose you are interested in accessing the window of the left pane that shows the slide sorter bar:

Reacting to Modifications of the Configuration

The following code turns on the slide sorter bar when the center pane is switched to the edit view, outline view, or notes view and turns it off for all other views. The drawing framework contains a module in the application layer that does essentially the same.

There are three things to note in this code:

To provide a new resource, say a SingleColorView that fills a window with a single color, you have to

A view has to support the css::drawing::framework::XView interface which is derived from the XResource interface. Both interfaces are extremely simple because the drawing framework does not need to know much about its resources.

The knowledge is concentrated only in the factory and of course in the implementation of the new view. Both a new resource and its factory are typically deployed together so they can use private and implementation language dependent means to communicate with each other and share information.

The factory is given a ResourceId when asked for a new resource object. For the SingleColorView the ResourceId is used to look up the corresponding XPane object from which the XWindow reference is obtained. For the standard panes the XPane object supports the XUnoTunnel interface which gives access to the VCL Window pointer, but that is not used here.

The factory can be registered in two ways.

For the latter you have to provide a UNO service for the view factory, say com.sun.star.drawing.framework.SingleColorViewFactory. With this, merge the following entry into the Impress.xcu file.

Note: It is recommended to use a name for the resource factory configuration which is likely to be unique, for instance by employing the usual "org.*" or "vnd.*" scheme. If you choose a name too generic, it might conflict with existing node names, overriding other factories, causing them to be completely unavailable. In the worst case, this will result in Draw/Impress being unusable.

All what remains to be done is to request the view. To show it in the right pane, instead of the task panel, make this call: