The sidebar (working title) is a new feature likely to be in the 4.0 release. It combines ideas and code from both the Symphony sidebar and the OpenOffice Impress task pane.

The UX part of the work is described on another page. This page focuses on the API design and implementation.

Help in whatever form (writing code, designing the UI, testing) is welcome.

Controls in sidebar pane are themable. Click one of the preset buttons in the Java theme dialog to see one of the proposed themes applied to a working panel: 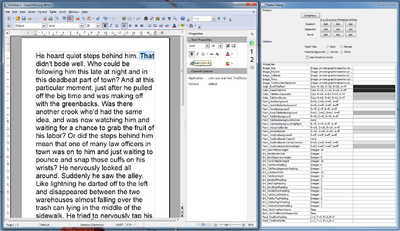 Migration of Symphony text properties panel (work in progress). With original Symphony icons (far left) and OpenOffice icons (all other) and with different colors for panel titles and panel backgrounds: 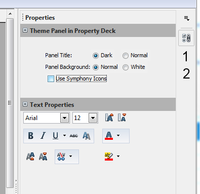 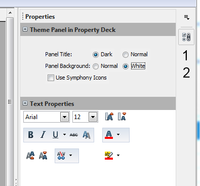 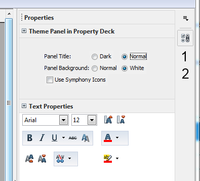 Simple panels, provided by a Java extension. Menu for switching between decks and for hiding or showing decks: 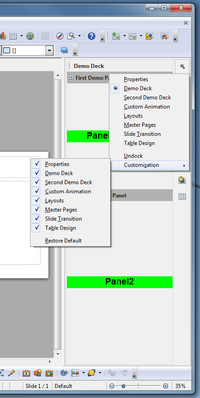 Developer builds for the sidebar use an internal and unofficial version number in order to cope with incompatible interfaces changes. The current version number is 0.6 (as of January 28, 2013). Builds exist for Windows, Linux (requires glibc >= 2.15: Ubuntu 12.4 or later, Fedora 17 or later...), and MacOSX.

The activation of the sidebar is still a little inconvenient:

Now you can create/open Writer, Calc, Impress or Draw documents and work with the sidebar. In Impress you have to enter text edit mode for all buttons to become enabled (the text property panel would/will normally not be shown when not editing text). Buttons with drop down boxes do not yet work.

There is a Java extension for development and debugging of the sidebar. It can be downloaded here. Note that it writes a log file to /tmp/sidebar.log. On Windows without cygwin this may not work. Do not use the developer builds for important documents: there may be dragons (aka severe bugs).

On Windows and Linux you can use it to

The "Theme Dialog" has three sections:

Presets
Ten buttons let you choose between the nine themes proposed on this UX page. A tenth button activates a theme that is similar to the original Symphony sidebar.
Options
More fine grained options for changing the panel title bar background (normal, dark), the panel background (normal, white), use of Symphony icons, use of system colors (not yet fully implemented), use of the high contrast mode color scheme. The later does not activate the high contrast mode. It is just a quick way to activate the color scheme.
Properties
A list of all the properties in the sidebar theme XPropertySet that are evaluated for the look of the sidebar. Editing is not (yet) possible.

Work in progress. Comments are welcome. 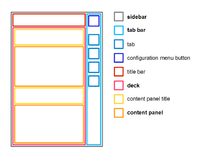 Schematic overview of sidebar components. Location of elements do not reflect UX design.

sidebar
Name of the feature and name of the control including all its components (icon bar, content panels).
Also known as task pane(l) or tool pane(l)
tab bar
Similar to a vertical tool bar. Clicking on buttons switches between sidebar decks.
deck
Contains one or more content panels. Only one deck is visible at any one time.
content panel
Displays information about the document and/or provides the means for document modification.
Each content panel focuses on one topic like font, table or shape properties.
There may be more than one content panel in a deck.
Examples are the task panels of the Impress task pane or the property views of the Symphony sidebar.
title bar
Displays the title for the current sidebar deck.
Can contain a closer button.
content panel title
Displays the title for one content panel. Optional when there is only one content panel.
configuration menu button
Opens a popup menu that allows switching between decks and also allows the activation and deactivation (tab is not shown) of decks.

The set of visible deck and content panels changes when a context change is broadcast. Context changes occur for example when in Writer the cursor is moved from text into a table or when in Impress text editing of a shape is activated.

Decks and context panels are specified via configuration and UNO interfaces and thus can be implemented not only in the AOO core code but also by extensions.

Context change broadcasts have to be manually inserted into application code.

The sidebars (there is one per document window) listen for context change notifications and rearrange the set of visible decks and panels according to the configuration entries for each deck and panel.

There will be a predefined standard set of contexts but extensions can provide decks and panels for new contexts and can also notify context changes for them.

For the actual creation of panel objects (decks do not need per-object implementation) the existing ui::UIElementFactoryManager and the configuration entries in the <application>WindowState configuration files are used.

It is the responsibility of the sidebar to display the right set of content panels for the current combination of application (writer, calc, impress, draw, base) and context (eg text-editing, table-is-selected).

The visible set of deck and content panels changes on three occasions:

The list of open and done parts of the sidebar implementation are (to be expanded and color coded):

The migration of the Symphony panels to OpenOffice is a lot of work. Here is how you can help.

The content in the sidebar is organized into decks, panels and tabs. There is always exactly one deck visible. It can contain one or more panels. Tabs are allow manual switching between decks. In general the current deck and its panels is defined by the current context. A context consists of an identifier for the application and one identifier for the actual context like text editing, cursor in table, image editing and so on.

Both UNO API and configuration represent a context with two strings:

For the C++ implementation there is a enum wrapper that allows switch() statements:

Notification of context changes is done via one single event multiplexer that is used by all documents and views:

There is a C++ convenience wrapper in svx:

that has a single static method:

It hides the messy instantiation of the UNO singleton and conversion of the parameters. The rxController is used for two things:

The eContext argument is defined in

Look for Update calls for SID_SVX_PROPERTY_CONTEXT

and for calls to

Notification of start of text editing in Draw/Impress:

Notification of Draw/Impress having been started:

Creation of a panel factory

Panels are created by factories via the ui::XUIElementFactory interface and its

The sidebar calles the createUIElement() method with the these arguments:

ParentWindow
a awt::XWindow object that is to be used as parent window for any new windows created by the panel. Both size and location of this parent window are modified by the panel layouter of the current deck. A panel that wants to layout its controls manually has to listen for size changes of the parent window.
Frame
the frame::XFrame object of the view for which the sidebar displays decks and panels.
SfxBindings
a pointer to an SfxBindings object (wrapped in a sal_uInt64) that can be used to create controls. This hack is intended as a temporary solution. It is desirable to replace it with a UNO based solution.

The panel factory is expected to create and return a ui::XUIElement object for a given URL. Create a new panel like this:

Creation of a panel control

The content of a panel is typically painted by an instantiation of the vcl::Control class. The XUIElement interface gives access to the XWindow component of the control via the XUIElement::getWindow() method.

Implement the XUIElement interface and add it to a panel factory.

Choose a panel factory in the module where the new panel class will be located. Add support for the panel class to the XUIElementFactory::createUIElement() method.

dynamic_cast<> to check if the interface is supported. If it is SidebarPanelBase converts the event data to an EnumContext object and calls ContextChangeReceiverInterface::HandleContextChange().

For the implementation or migration of the actual panel control see the following section.

The Symphony property pages represent much functionality that in AOO can be found in toolbars. That may explain the extensive use of ToolBox controls in the panels.

as base classes. These take care registering at the ContextChangeEventMultiplexer and item controllers.

Then, in the constructor replace

In the implementation replace

The first lines (above the switch() statement) could be moved into the base class.

In the header replace

In the constructor replace

to be informed of state changes.

Where possible we should use the standard AOO icons (although in same places we should thing about replacing the AOO icons with Symphony icons). Find the uno command name and do a replacement like:

Do the Draw/Impress panels last, these are more complicated than the others due to their use of an Impress specific framework.

See svx/source/sidebar/text/TextPropertyPanel.cxx in the sidebar branch for the first migrated panel.

Not all the API design and implementation work has to be started from scratch. There several parts that can be used/reused/adapted.

The drawing framework is used for the Impress taskpane, all Impress views and the slide show. A tree of URLs (called a configuration) defines the different layers of containers (windows) and views (taskpane panels). SD views only modify a configuration, update and synchronization of the associated view shells is left to the ConfigurationController.

Contextual changes of tool bars are handled in SD in a single place by the ToolBarManager. It receives notifications about context changes by registering as listener at the EventMultiplexer.

Screenshots from the developer snapshots. In all three screenshots mouse is over the third button from the top in the sidebar, button above is selected. Click to enlarge.

Examples of toolbars in other applications:

For comparison here is a screenshot from Symphony (on Windows):

The unfinished implementation of an office wide toolpane with Symphony like functionality can be found in svtools/source/toolpanel/ and sfx2/source/dialog/taskpane/. See Framework/Article/Tool Panels Internals for details.

It is already possible to provide new tool panels from an extension.

In the symphony branch

Painting of control backgrounds is also hardcoded. Look for instance at svx/source/propertypanel/paragraphpropertypage.cxx and search for calls to DrawGradient(). Colors for the background gradients are defined in every file that paints button backgrounds.