As you can see in the graphs most of the CWS were integrated after Feature Freeze and also after Beta 1. This time was needed to polish the features, fix the critical bugs which were reported by beta testers and to clean up the install sets and setup to be as save as possible after the split to the 3 Layer Office. 77% of all CWS went through the full approval process of the Sun QA. 12% were approved by Release Engineering team, 5% by the Sun Development team and the contribution from the OOo community was round about at 6%.

Integrated issues with CWS for OpenOffice.org 3.0

The distribution on issues and user groups are a little bit different. 85% of the registered issues at a CWS were approved by Sun QA team, 7% by Sun RE team, 3% by Sun DEV team and 5% by the OOo community contribution.

Integrated Features and Enhancements for OpenOffice.org 3.0 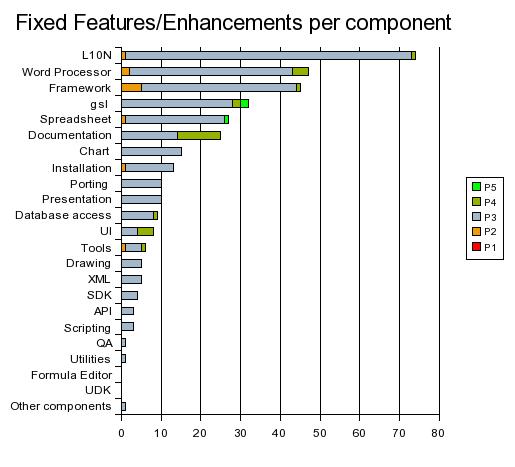 Round about 350 issues marked as features or enhancements were integrated for OOo 3.0 until Feature Freeze. Some of them were late, some came too late and some had to be integrated after Beta 2. Which components got most of it, can be seen in the next graph.

More than 1700 issues which are marked as bugs were fixed. 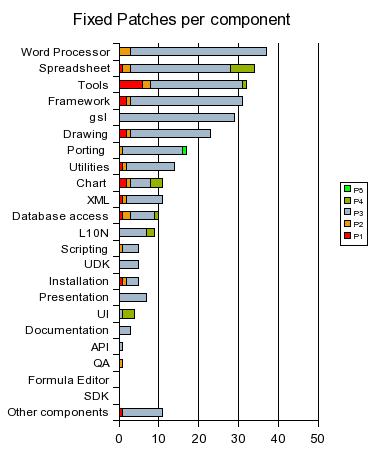 Exactly 300 issues which marked as patch (most code contribution by community members) were fixed and integrated also in OOo 3.0.

Numbers about integrated issues per type for OpenOffice.org 3.0 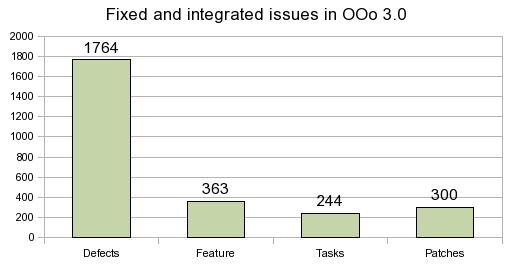 Links for OOo information about OpenOffice.org 3.0