Results of our visit to Apple WWDC 2007

During Labs, and other occasions, we met Apple engineers, in the following domains :

What follows is what we learned from our discussions with the Apple people who told us their opinion what we should ideally do.

The most important results first:

What does this mean for the OOo Mac port ?

This can be done gradually as Carbon functionality can be used from Cocoa. For our UI this enables us to deliver a solution quickly with HIToolbox's themed drawing functions. Later we will have to replace this somehow using NSView implementations, since Cocoa doesn't have (and as far as we know won't ever have) equivalent drawing functionality. However on the updside this supposedly will at least give us accessibility implementation for free.

Probably not a bad idea :

The actual UI changes will be harder to do. Two of the things with severe impacts are these:

The OK button sits in the lower right corner, the cancel button left to it and then all other buttons. An optional HelpButton follows a completely different look (it is a small icon with a questionmark basically).

This is also the button order that should be used in GNOME. In GNOME the help button is a normal button in the bottom left corner.

Labels and fields are center aligned

Best example: our Tools->Options dialog. There is a ton of fields there, all preceded by a Label. These Labels are left aligned. On Mac the fields should be below each other and left aligned, the corresponding labels precede their fields and are right aligned.

These examples show us that we need a layouter for our controls. And more, this layouter needs to be configurable so it can move the managed controls around quite severely, a row-column approach will not suffice. Lucky for us there is currently a project underway that should implement a layouter. Hopefully we can make our needs known and profit from that. Since other platforms (like e.g. gtk) also can profit e.g. from a different button order, this is perhaps not an overly optimistic wish.

If there are so many Tabs in a TabDialog that they do not fit in one line, do not open a second line, but add a last small Tab with a dropdown button. The dropdown opens a menu that shows all available Tabs and a Checkmark for the current one. Selecting a new one should activate that TabPage and the Tab should move to the middle of the TabControl if possible. This certainly is something that other platforms could profit from, too. Multilined TabControls are a nuisance everywhere.

If a group of controls contain only a single item, skip the grouping alltogether. It's useless. Example: Use OOo dialogs in Tools->Options->View.

In general group controls like FixedLines should be removed; it is better to separate logical groups by adding space instead.

There are certain terms that should be replaced on the Mac platform, e.g. "wizards" are called "assistants" here.

Texts of RadioButtons and CheckBoxes should always bgin with a verb. E.g. Tools->Options->View: "Object refresh during interaction" should rather be "Refresh objects during interaction". The formulation is clearer since it looks more like a command what should be done.

Some things to be omitted

A small installer was suggested that would let the user choose components and languages to install, then download and install them all at once.

Notes : download everything supposes the network is available (not obvious for all users )

This would not install a packaged installation, but simply be a more advanced form of drag and drop installation in that the user does not need to download everything. After download the selected components would simply be copied to a location of user's choice.

Some impressions from WWDC2007 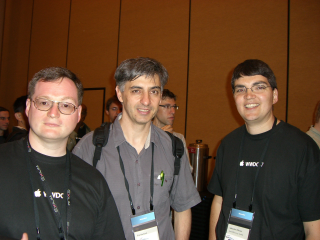 The OOo MacPorters at WWDC 2007 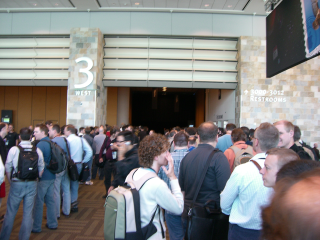 Proceedings in the software industry (actually waiting for the KeyNote to start :-) ) 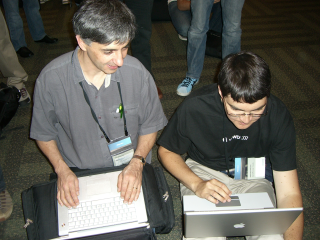 Developers at work while waiting in line