In addition to changing the menu font (described in Chapter 2), you can add and rearrange items on the menu bar, add items to menus, and make other changes. 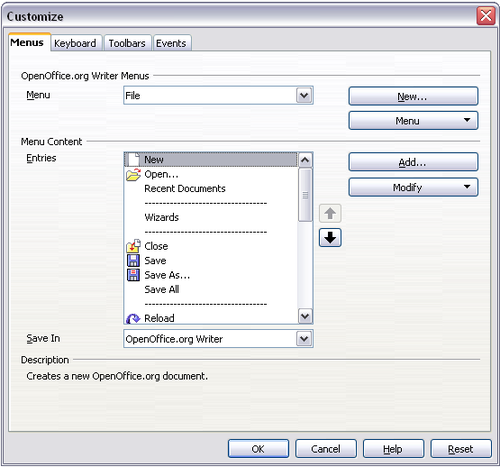 The Menus page of the Customize dialog.

In the Customize dialog, click New to display the dialog shown below.

The new menu now appears on the list of menus in the Customize dialog. (It will appear on the menu bar itself after you save your customizations.)

After creating a new menu, you need to add some commands to it, as described in Adding a command to a menu. 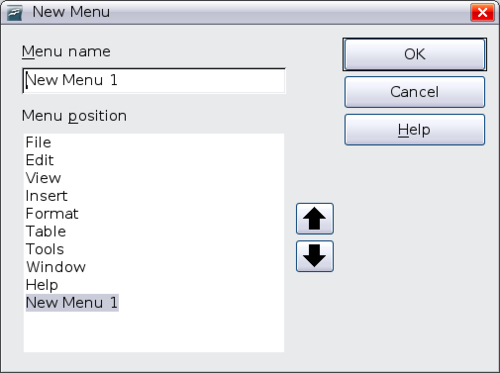 To modify an existing menu, select it in the Menu list and click the Menu button to drop down a list of modifications: Move, Rename, Delete. Not all of these modifications can be applied to all the entries in the Menu list. For example, Rename and Delete are not available for the top-level predefined menus (such as File).

To move a menu (such as File), choose Menu > Move. A dialog similar to the one shown above (but without the Menu name box) opens. Use the up and down arrow buttons to move the menu into the required position.

In addition to renaming, you can specify a keyboard shortcut that allows you to select a menu command when you press Alt+ an underlined letter in a menu command.

Adding a command to a menu

You can add commands to the predefined menus and to menus you have created. On the Customize dialog, select the menu in the Menu list and click the Add button in the Menu Content section of the dialog.

On the Add Commands dialog, select a category and then the command, and click Add. The dialog remains open, so you can select several commands. When you have finished adding commands, click Close. Back on the Customize dialog, you can use the up and down arrow buttons to arrange the commands in your preferred sequence. 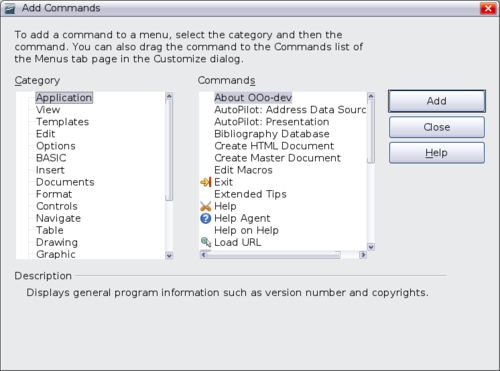 Adding a command to a menu.

In addition to changing the sequence of entries on a menu or submenu, you can add submenus, rename or delete the entries, and add group separators.

To begin, select the menu or submenu in the Menu list near the top of the Customize page, then select the entry in the Entries list under Menu Content. Click the Modify button and choose the required action from the drop-down list of actions.

Most of the actions should be self-explanatory. Begin a group adds a separator line after the highlighted entry.