Difference between revisions of "Calc/Implementation/Formula cell and cells dependence"

Calculation is the most important feature for Spreadsheet. There are many formulas to help user to complete some work. User can use formula to calculate literal data. For an example, "=SUM(1;2)". But in most cases, users use formula to calculate data stored in other cells. For an example, "=SUM(A1;D3)". When the data is changed in one cell, the formula cell which references this cell need be notified to recalculate to reflect the new value. How this happens? Broadcast and Listener.

It is a typical broadcaster and listener relationship when a formula cell reference a single cell. For an example, B2 is a formula cell(=A1+B1), which reference cell A1 and B1 directly.

ScBaseCell is the basic class for any cell. A cell can be a value cell, string cell, formula cell, etc. Only formula cell need listen to other cells. A ScFormulaCell is a listener. A ScBaseCell has a broadcaster. It takes ownership of the broadcaster.

1.1 establish the broadcaster and listener relationship

So there are two kinds of ScNoteCell. One is an empty cell with comments. The other is an empty cell which is referenced by other formula cell directly. This is also the reason why use ScNoteCell to replace a normal cell when deleting a cell from a column if this cell has a broadcaster. Please refer ScColumn::Delete(SCROW) for detail.

1.2 Break the broadcaster and listener relationship 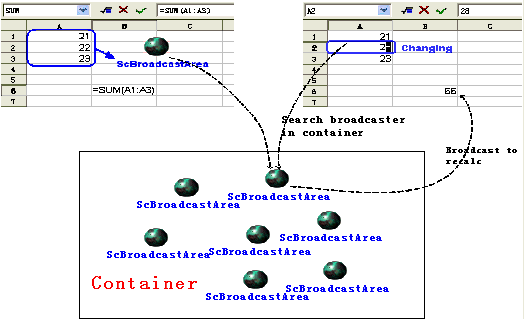 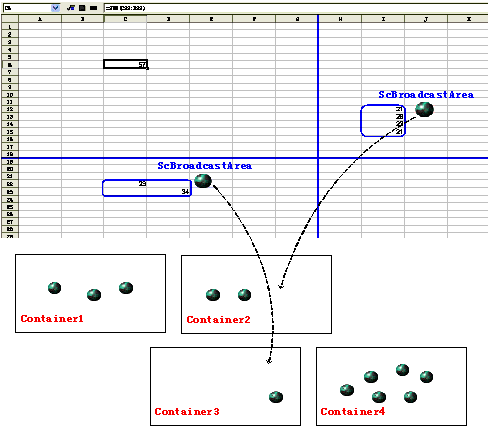 2.2 Partition of the table

2.3 Establish and break the broadcaster and listener relationship

3. Response to the change

As before mentioned broadcast-listener mechanism, cell A1 listen to B1 and B2, cell B1 and B2 listen to cell C1. When C1 changed, B1 and B2 will be notified. How to spread the change to A1 in an efficient way. When a formula is notified that its dependency is changed, it set itself dirty and put itself into a FormulaTrackList in ScFormulaCell::Notify() method. FormulaTrackList is a doubly linked list in ScDocument. Every time, when some cell changes, besides broadcast the change information, ScDocument::TrackFormulas() is called. In ScDocument::TrackFormulas() method, for every formula cell in the list, it broadcasts the event that it is changed. The influenced formula cell which is not in the list will be added to the end of the list. When cell B1 broadcast, Cell A1 will be added to the FormulaTrackList in ScFormulaCell::Notify() method. Then A1 will broadcast it is changed. So all formula cells which has direct or indirect dependency for the original changed cell will be notified.

If one cell is modified, it will broadcast the event. The listening formula cells will be notified and set itself as dirty. When there is some request to get the cell value, such as Paint(get the value to paint), Saving(get the value to save in xml), the formula need be calculated. This is a efficient and high performance method that AOO does not need recalculate all related cells when a cell is modified. It only set the flag. For a cell is modified, ScDocShell::SetDocumentModified() is called, which cause ScTabViewShell be notified(ScTabViewShell::Notify()). Then ScTabView::UpdateFormulas() method is called to update all formula cells in visible area.