Cells containing either numeric value or formula whose result is numeric are subject to automatic adjustment of decimal places based on the available column width. The automatic decimal place adjustment takes place only when their number format is General.

When this check box is not checked, cells with General number format will use as many decimal places as the column width allows. By default, this option is not checked. 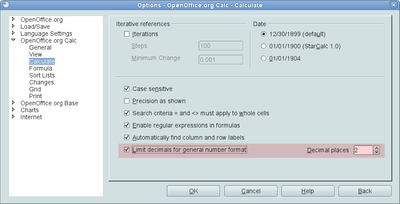 When the number format for a cell is General and its displayed value is numeric, it undergoes automatic decimal place adjustment to fit available column width if the column is not wide enough to display the cell value in full. This adjustment is performed in the following fashion.

There is an exception to this rule, that is, when the value of the cell is less than 0.0001 (=1.0E-04), the value is displayed in scientific notation if