Difference between revisions of "Base/New features in 3 3"

From Apache OpenOffice Wiki
< Base
Jump to: navigation, search

New features in OOo 3.3 Base

New features "under the hood"

This new option is available for database connections via ODBC, JDBC, and ADO. 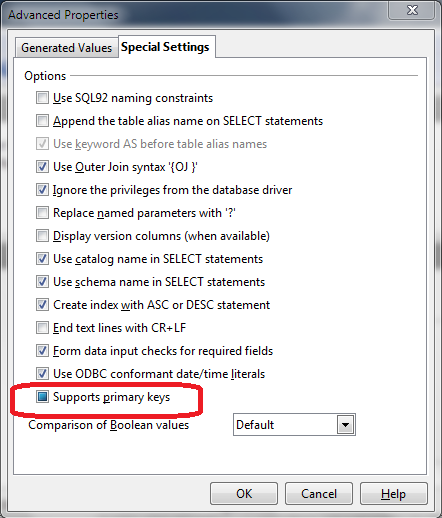 When connecting to a database via a generic API like ODBC, JDBC, ADO, Base currently applies a heuristics to determine whether or not this database supports primary keys, because none of those APIs has dedicated support to retrieve this information.

Since the heuristics sometimes fails, there's now an explicit option (Edit / Database / Advanced Settings) named "Supports primary keys". It's implemented as a usual tri-state check box, where un/check mean "do (not) assume PK support", and the "undetermined" third state, which is the default, means "apply the heuristics".

Note that if this option is just for overruling the heuristics. If you check it for a database which actually does not support primary keys, you'll probably be slain with error messages as soon as Base attempts to actually use PK related features (like creating a PK in the table designer).

Base now supports updates on more than one table

Base now supports updates on more than one table.

Updates are only possible when the row can be fetched right after it was inserted/updated to get all default or changed values by the underlying database. To allow updates on a query on more then one table, all primary keys (all columns which are part of the primary keys) must be in the select list. Base now checks which prerequisite exists and then decide if the query is modifiable or not.

Base now supports database registrations which are declared as read-only.

Detailed information can be found here:

Extending existing SDBC drivers by extensions is described here, Most drivers miss to support special features like to alter view definitions or to add or drop key of a table. Therefor these interfaces

can be implemented by an extension.

Configuration name Interface name which has to to be implemented

In favor to allow to get the definition of queries, forms and reports from other locations as the default file format specification, an extension may implement a service which implement the following named interfaces.

The configuration entries are named

which all have to implement the interfaces

Ctrl+F5, which used to focus the first (by a definition which is hard to understand by the average user) form control in a document, has changed its behavior: It now focuses the form control nearest to the current cursor position, if the focus is not within a form control currently. Otherwise, it gives the focus back to the document view.

Form controls use the same text rendering as the containing document

This new feature does not really belong to Base only.

The way how controls render their text has changed. Well, this applies to some controls, in some documents, at least.

In general, the OOo applications format their text on the screen using a so-called reference device, which might either be the printer selected for the document, or a virtual device (which one is controlled by a per-document option).

Form controls previously never participated in this game, they always formatted their text according to the screen they were displayed on. As a consequence, form controls which were embedded in the text flow of the containing document broke the document layout when viewed on different devices (print preview, printer, PDF export), or even only when viewed in different zoom levels on the screen.

This behavior can be enabled on a per-application level, more precise, on a per-module level. There's no UI for changing the behavior.

Instead, the existing configuration structure below the /org.openoffice.Office.Common/Forms/ControlLayout has been extended, so that now for instance the node .../ControlLayout/com.sun.star.sheet.SpreadsheetDocument/UseDocumentTextMetrics

controls whether the reference device text rendering for controls is enabled in spreadsheet documents.

By default, the usage of the document's reference device is enabled for text documents, drawings, and presentations, and disabled for all other document types (spreadsheets, database forms, database reports). 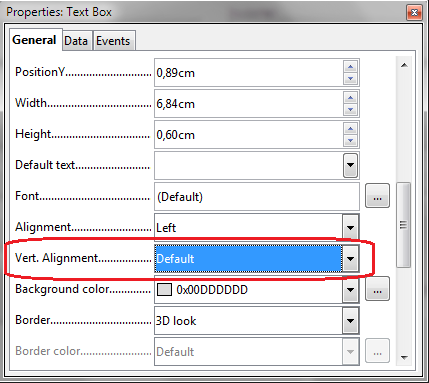 In the Report Designer the Add Field dialog can be accessed via the shortcut ALT+F8. 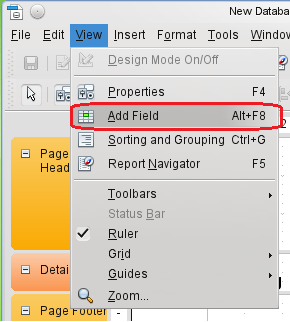 Now it is possible to define a new property in the drivers xcu file. Per default this is enabled for MySQL (JDBC) and Ado (including Access, Access only allows to view it, it can not be changed). 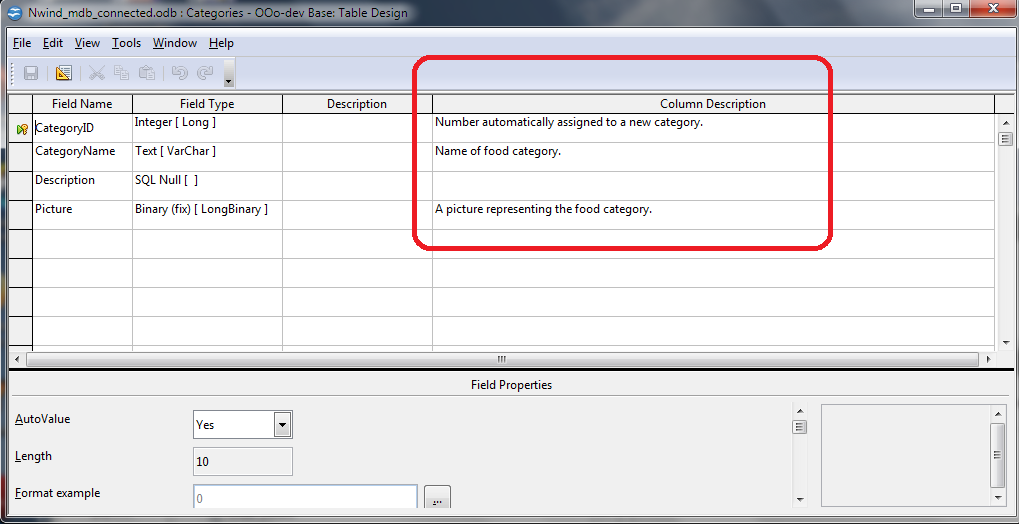